The bond between animals and humans has long been known to be incredibly strong. Studies have even shown that pet owners are 8 times more likely to survive long term after a heart attack.

Dogs are by far the most common type of therapy animal, due to their friendly nature and their ability to be easily trained. However some organisations, such as ‘WildSci’, have started using a variety of different animals for therapy situations.

WildSci visits nursing homes for therapy purposes with animals such as rabbits and chinchillas. However, the company also provides its clients with an array of more exotic animals, such as frogs, snakes and geckos.

According to Amber Fox, an animal handler with WildSci said the residents’ prefer the softer animals, saying “It’s brings back memories of when they had pets, and it’s also something that can sit on their lap and be stroked. Quite often with people with dementia, that action of stroking brings back so many memories for them.”

“I don’t get bored of ever seeing people’s reactions to animals. I think it’s wonderful.”

Some have raised concerns over the safety and ethicality of using exotic animals in therapy. However, Dr Elizabeth Ormerod believes that by working alongside veterinarians, companies like WildSci can make a real difference and bring real joy to those who need it. 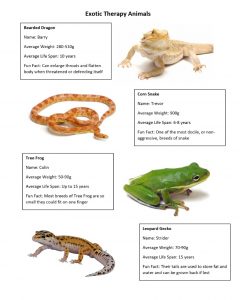 Info-graphic made by Harvey Gough