Boris Johnson’s government is under pressure to retain the temporary £20 weekly universal credit up-lift that is due to be axed in April.

Debate on the issue began in the House of Commons at 3:30pm this afternoon, after it was selected by Labour for the Opposition Day Debate topic.

Johnson has ordered his MP’s to abstain from the vote, despite many conservative MP’s vocalising the contrary opinion to extend the uplift.

The issue of the proposed cuts was discussed by Stephen Crabb, Conservative MP for Preseli Pembrokeshire, in a Poverty Report Webinar hosted by the Joseph Rowntree Foundation last Friday.

The outcome of the vote is non-binding, but Johnson will find himself under immense pressure to re-address the issue if the vote is swayed in favour to stop cuts to the benefit uplift.

Mr Crabb said: “When I talked to colleagues of mine in the conservative party there was a mixture of views. I’ve talked to people who agree with me, that the uplift should be extended, they recognise that it has made a real difference during the pandemic.”

The conservative MP said that cutting the temporary uplift feels ‘wrong in principle’ and that the welfare uplift was ‘partially restoring’ what has been squeezed out of benefits over the last five years.

Mr Crabb said: “The push back from those who don’t agree, they are concerned about the need to get public spending back to the pre-pandemic ratios.

“The ‘work is the best route out of poverty’ message that we’ve been pushing very hard in the last five years, we somehow diminish the value of that message by agreeing to spend more on welfare permanently.”

The number of households claiming Universal Credit in the UK:

Statistics sourced from Department for Work and Pensions.

Types of households claiming Universal Credit in the UK:

The Resolution Foundation is an independent organisation, working to improve living standards of those on lower income.

The foundation predicts that the abolishment of the Universal Credit uplift would result in an increase in poverty across the UK from 21 per cent to 23 percent by 2023-45, resulting in pushing a further 820,000 children into poverty.

“The living standards outlook for 2021 looks bleak at present – but the Government can directly improve it.

“The decision on whether to keep the Universal Credit boost will help define whether this is to be a parliament of ‘levelling up’ living standards or pushing up poverty.”

SNP MP Drew Hendry commented on the impact keeping the Universal Credit uplift would have on Scotland: “The UK government must urgently introduce support for the three million excluded, increase the minimum wage in line with the Real Living Wage, and make the £20 Universal Credit uplift permanent and extend it to legacy benefits.

What is the £20 Universal Credit uplift?

In response to the unprecedented covid-19 circumstances that hit the employment sector, the Chancellor raised the level of universal credit by a £20 weekly increase.

Universal credit is a benefit that a household can claim if they are low on income or out of work.

The announcement stipulated that the uplift of welfare spending was a ‘temporary’ fiscal policy, that would be withdrawn after 12 months.

The increase in universal credit provided 6.2 million families across the UK with an extra £1,040 on top of their original benefits. 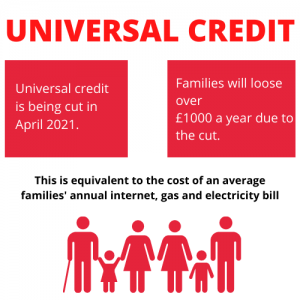 The House of Commons estimates that a continuation of the uplift throughout 2021 would cost the government a further £5.8 billion.

When will the vote commence?

The debate discussions are ongoing this afternoon, and the parliamentary vote is expected to commence in the early evening.

Tell us how you would you be affected by a reduction in your current Universal Credit by getting in touch:

How has the pandemic affected the Bournemouth security industry?
Next Post: How has Covid-19 affected education in India?