The proposed admission fee would help to fund and provide better facilities such as bins, toilets and patrols to help ensure people are following the bylaws that have been administered by the Verderers and the Forestry Commission.

Mr Climpson, explained the proposed process: “What you do is you drive past that camera and it charges you £5 to get in. Out of that £5, all the money is evenly distributed and all the big stuff gets looked after and funded properly. And £5 for a day in the forest for a car load of people is just the best value you could ever imagine.”

However, Vice Chairman, Gale Pettifer of the National Park association does not agree with the proposed charges as she does not wish for the New Forest to be urbanised through the introduction of bins, shops and toilets.

Ms Pettifer said: “I think the overall message is to get across to people is that this is a nature reserve. This is a large nature reserve and to give people an idea of the impact they have and this whole idea of leaving nothing but footprints and taking nothing but memories.

“I think that’s a really important message to get across to people and will actually help to protect wildlife and the landscape.”

Mrs Pettifer stated that the introduction of admission charges are a complex issue and once you have charged someone they think it is an entitlement and would think they have the right.

Discussions surrounding the admission to the New Forest have come from the research conducted by the National Forest Authority which found in a 6 month period in 2021 over 2,700 breaches of bylaws were recorded.

To combat the recorded amount of bylaw breaches last year the National Forest Authority developed the ‘New Forest Action Plan’ to promote the rules when attending the New Forest which include parking only in car parks, taking home litter and dog waste and no wild camping.

Results from the action plan have revealed an 8.6% decrease in litter despite a 60% increase of visitors in coastal locations and a decrease of 40% of outdoor fires in the New Forest area. 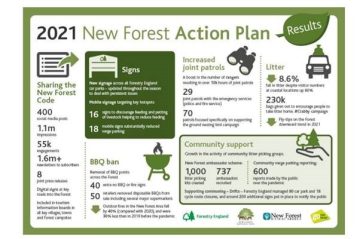