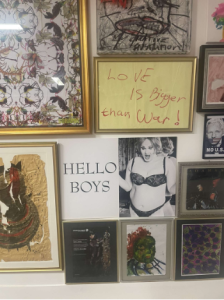 Stuart Semple, founder of the gallery GIANT in Bournemouth, holds an exhibition from Daniel Lismore.

The exhibition is being held from January 13th- 12th March.

Originally, Lismore showed his studio as part of a huge exhibition at Herbert, Coventry, presenting his first self-portrait exhibition, at the Tate modern, in 2013.

Stuart and Daniel have been working hard on the show for a year.

The idea behind the exhibition is to climb inside Daniels mind, to see into his world.

Stuart describes Daniel as a ‘living sculpture’ and added: “Loads of new things have been added to the show.

“You’re going to see his collections since he was a tiny boy.

“Things he’s made with Mariah Carey, Dave Hurst, all his amazing outfits.

It’s a great exhibition and I’m really pleased with it.”