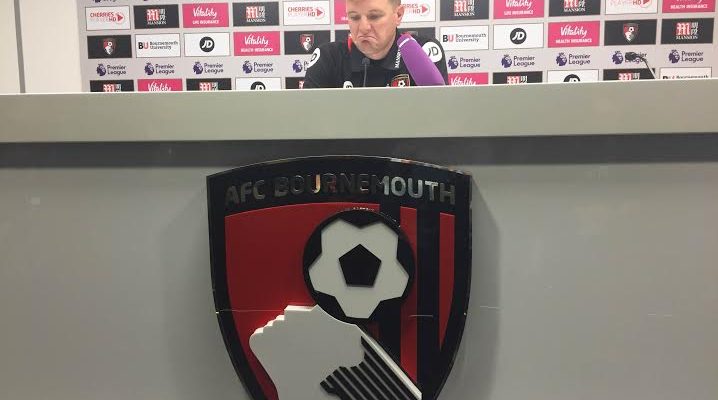 The Cherries suffered a 2-0 midweek defeat at the hands of Burton Albion, in a strange affair which saw 28 minutes of added time due to floodlight failure at the Pireli Stadium.

However, AFC Bournemouth manager Eddie Howe believes a win tomorrow would illustrate his side’s positive start to the season and dismissed questions of inconsistency.

Howe said: ““It’s difficult to look at consistency when looking at different competitions.

“Consistency may well be defined by what happened this weekend, so im reluctant to throw Burton into that but that’s not to say we should exclude the game from all of our thinking.

“We have to now get our minds back on the Premier League, and if we are able to get a positive result then that will be three in a row.”

Despite this, elements of the Cherries’ fan base were disappointed with their team’s early exit from the Carabao Cup, with fingers pointed at Howe’s team selection.

Eddie Howe said: “We’re very disappointed to go out, I still love the team I picked.

“It is full of quality players, but for whatever reason last night that didn’t show.

“You expect criticism if you don’t win, but I believe the team was good enough to win that match.”

West Ham have also had a high-flying start to the season along with the Cherries, leaving them in 5th position.

But off the back of their superb home win against Manchester United, they were thumped 4-0 against League One Oxford United on Wednesday.

On their League Cup upset, Howe said: “It’s a difficult one. I can’t speak from West Ham’s perspective, I can only speak from our own.

“We have a really young squad this year, with talented players that we want to give opportunities to.

“If I don’t play them in that game, when do they get that chance to show how good they are?

“The young players will learn from that which is a valuable tool to experience it, know that we weren’t at our best and then recover.”

Despite this, Manuel Pellegrini has impressed since taking the helm at the London Stadium, notably this season where the hammers are coming off the back of three league clean sheets in a row.

Howe said: “I think Pellegrini has implemented his style now, he’s had time to work with very good players.

“It (West Ham’s Clean Sheet record) won’t be at the forefront of my mind, they have been good defensively and good structures in and out possession.

“It will make us equally aware that we have to be good in our own formats of the game, so our attacking play in how we will break them down has to be at the highest level.”