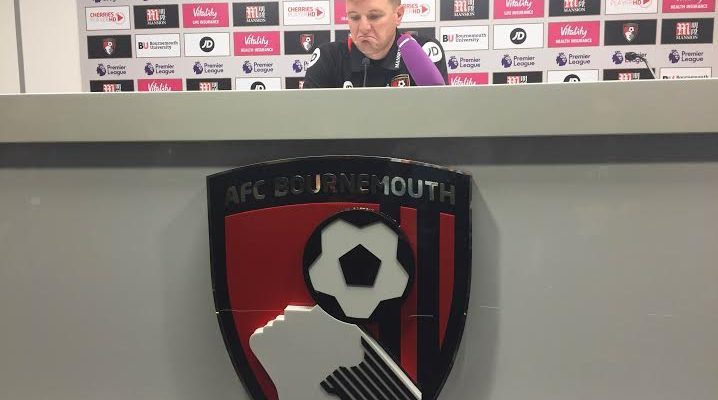 Eddie Howe’s Bournemouth are in a very good mood ahead of their trip to the Emirates on Sunday afternoon.

The Cherries go into the game sixth in the table and unbeaten in their last three league games, however they have never won at the Emirates since coming up to the top division.

When asked about if Bournemouth could push for the top six, Howe replied: “we can’t think about that we have to focus on the next game and when we get to a congested Christmas and January then we will see where we are.”

After the draw at home to West Ham on Saturday, Bournemouth will be looking to pick up points on the road after impressive results away from home.

“We are in a very good place at the moment but we know that it can change very quickly so we have to keep it up.”

Bournemouth will be without Dan Gosling and Junior Stanislas for Sunday’s game.

“They are not quite ready for this game but they’re getting close, there’s a whole group of players getting closer.”

Arsenal are currently fourth in the league with only one defeat from their first seven games.

Howe said: “They’ve got quality and have a great manager. We need to make sure that we start quick in the game.

“We haven’t started well at the Emirates Stadium in recent years so we need to start better.

“They are dangerous and we’ll have to be at our best.”

Arsenal’s Pierre Emerick Aubameyang has scored seven goals in seven league games for the Gunners making him one of the inform strikers in the league.

Howe added: “You have to stop the team in general, which will hopefully stop the individuals from hurting you.

“But I think you have to respect every opponents qualities and our players will certainly be aware of his, but I don’t think you can have necessarily one plan for one player.

I think you need to be aware of certain things and then try to deliver a better defensive performance.”

Eddie Howe on the approval of the new training ground plans

On Thursday it was announced that the council would back the clubs proposal for a new multi-million pound training ground at the Canford Magna Golf Club.

“The training ground is a massive thing for the football club.

“We can’t wait to get into the training ground, and it’s a really key thing for the development of this club.”

Bournemouth take on Arsenal at the Emirates Stadium on Sunday 6th October at 2pm.